“Are you TOUGH enough?” This is the slogan of one of America’s newest obstacle course/race challenges, Tough Mudder.  Made up of crazy obstacles (including a lake full of wet, sticky mud, a monkey bar-like ropes course, and running up a slippery ramp to get pulled over by teammates), Tough Mudder is designed to test your physical strength, stamina, and overall spirit.  It’s also designed to kick your out-of-shape American butt.

Tough Mudder is only ONE of the hundreds of new themed-race crazes touring nationwide. These aren’t just your standard half-marathons for charity. These 5Ks, 10Ks, and even full 26-mile marathons have gone above and beyond what running used to be, adding glow sticks, barriers, and even full blasts of color to your race.

So what’s with all the running?
With the rates of obesity in our country at an all-time high, it’s no wonder America is trying–desperately–to get fit. According to research by the American Heart Association, 154.7 million adults in the U.S. are overweight or obese. Breaking that down even further, that’s 79.9 million men and 74.8 million women. (Um. Wow. Not so much laying off the cronuts, are we, America?)

Well, at least we’re trying.  The recent trend in themed races is only helping our cause (and other important causes, too). Not only do we have a valid excuse to do something crazy-ridiculous (like running around a college campus in your bare undergarments, as the Undie Run entails), but we are raising awareness and helping charity. And looking good doing it too!

Here are some of the craziest, coolest races I’ve found going on nationwide:

1) The Santa Speedo Run: Folks living in some of the coldest cities in the U.S. had a crazy idea: why not run down our streets wearing Santa hats in the middle of December for charity? Each race benefits a local non-profit, speedos are a must, and runners are encouraged to come decked-out in their holiday gear. What better way to spread Christmas cheer? Check out The Boston Globe‘s video coverage of the 2012 Santa Speedo Run! 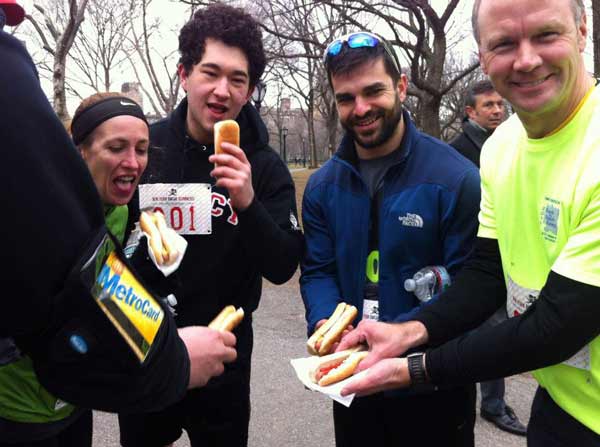 2) The New York Hot Dog Challenge: Yep, it’s exactly what you pictured. A 2.5-mile race around midtown Manhattan by the New York Rogue Runners, participants are given a hot dog at every stop (from one of those janky NYC hot dog stands, I’m guessing) and are forced like animals to eat before continuing the race. FRANKly, I think it’s doggone gross. 3) Run for Your Lives – The Zombie Run: This crazy 5K combines an obstacle course, live entertainment, free beer, and zombies. Runners have to go through different courses–such as a “blood pit,” a dark smokehouse, and a giant maze–all while being chased by hungry, relentless undead zombies. You better have your game face and good running shoes on, ’cause it’s insanity.  Join in on the fun here!

(Wow, they really do think of everything, don’t they?)

Rad. Themes, though? Really? What happened to traditional marathons…
This isn’t the Olympics! While not everyone is up to their A-game in fitness/marathon training,  themed races can be a better option for people who just want to dress up, fool around with their friends, and be chased by zombies (or something like that). Besides, it’s more fun!

“These types of races often feel more like a party than a competitive endeavor, so everyone has fun,” says Sarah Bowen Shea, co-author of Train Like a Mother and co-founder of the siteAnotherMotherRunner.com, an online web community for female runners. “For a novice, a non-traditional race has a less competitive, more festive atmosphere, which can help ease nerves. More advanced runners will appreciate running without the pressure of nailing a time on the clock.” (Source)

Health and fitness is important to maintain, so why not in a ridiculously cool way; giving back to charity, and having fun? Whether you’re a fast-paced sprint expert or new to the starting line, there’s a race for everybody. So put on your tennis shoes and start training today!