We live in a self-obsessed world where people share everything about themselves: filtered photos, thoughts in Tweets, lengthy status updates about their day. As if society needed to know even more about our lives, now there is a way to obsess about ourselves even more. A photo-sharing smartphone app is rapidly becoming part of our routine, one snap at a time. This is the Snapchat. Snapchat was developed in 2012 by two students from Stanford University, who are probably making millions off of their brilliant but insane idea. They were inspired by their love of “building things,” as the creators’ blog says. The app’s interface is simple. Basically, you take a photo or video of yourself, called a “snap,” (otherwise known as selfie) and send it to your friends for a set time limit (1 to 10 seconds). You can add a snazzy caption, or draw all over/decorate your snapchat to your heart’s content. Then hit send. After time is up, the photo disappears somewhere into the vast Snapchat universe. (Unless your photo is screenshot, of course. Then you’re pretty much screwed.) 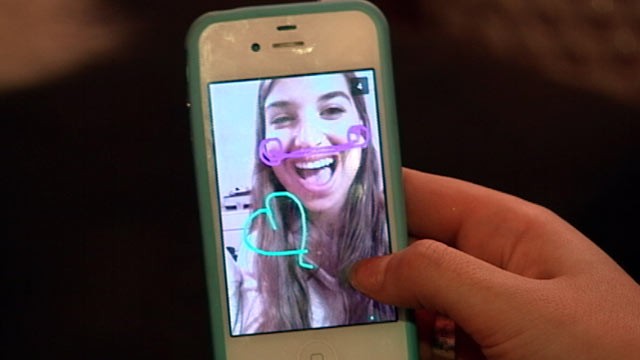 Of course, like any other social media platform, Snapchat also has its pro’s and con’s. I’ll share a few.

PRO: Snapchat captures life’s funniest, weirdest, and most memorable moments.
In the Snapchat website blog, creators Evan Spiegel and Bobby Murphy write about their idea when creating the photo-sharing app: “The social media profile attempts to convince us that life, in all its ephemeral flow, should also be its simulation; the ephemeral flow of lived experience is to be hacked into a collection of separate, discrete, objects to be shoved into the profile containers. The logic of the profile is that life should be captured, preserved, and put behind glass. It asks us to be collectors of our lives, to create a museum of our self. Moments are chunked off, put in a grid, quantified, and ranked. Permanent social media are based on such profiles, with each being more or less constraining and grid-like. Rethinking permanence means rethinking this kind of social media profile, and it introduces the possibility of a profile not as a collection preserved behind glass but something more living, fluid, and always changing.” (Source)

Um… what? Basically, they are saying that Snapchat preserves moments, called “snaps.” We can choose to share them for a certain amount of time, like little glimpses into our lives, and together create a narrative about who we are. Snapchat, Inc. also recently introduced its newest memory feature, the Snapchat Story. It basically stores your snaps for 24 hours, allowing people to see what a typical day-in-your-life looks like. The snaps always play in the order you experience them, and even includes a list of people who view them. Check out the concept of the Snapchat Story here.

CONS: Screenshots. Sexting. No privacy.
An article on Mashable.com talks about the dangers of sharing photos on Snapchat, especially with the new iPhone screenshot feature that does NOT let the snapper (you, with your embarrassing duck faces) know if a screenshot was taken. Blogger Andrea Smith says, “Just like anything else you do online, privacy is not guaranteed.” Be careful with what you send, because you never know who is sharing and saving it. For instance, two brainless freshman girls at Ridgewood High School in New Jersey took nude snaps, and found themselves later on Instagram, their bare bodies forever immortalized on the social scene. Read more about the investigation here.

Other pro’s? Snapchat doesn’t have extensive filters or photo effects, so people don’t filter themselves like crazy, and the drawing feature is pretty funny. Snapchat brings out the inner artist in some. Check out some of these hilarious snaps: Sadly, although it has its good things and bad, Snapchat will soon find itself among the other lost and forgotten social apps. But for now, snap while it’s hot!

PS. On a related note, check out my other post on shameless selfies!