Behold, food bloggers and sweet-tooth lovers: 2013’s newest food fad, the cronut. A hybrid of two of the most delicious pastries on Earth, the French croissant and the American-born donut, the cronut was created by chef Dominique Ansel at his bakery in New York City. The original recipe has spread worldwide; across bakeries in Los Angeles, Pittsburgh, even as far as New Zealand. It has become a pastry phenomenon… adding to the already increasing rates of obesity in the U.S., but really, who’s counting?!

According to Chef Ansel’s official bakery website, the cronut is made from a “laminated dough which has been likened to a croissant,” proofed, and then fried with grapeseed oil at a certain temperature. Then the Cronut is rolled in sugar, filled with a flavor cream, and topped off with a sweet glaze. The whole process takes about three days at the bakery.

But what is it about this food fad that’s got people lining out the door? Is the cronut really all that it’s cracked up to be? I decided to try the treat for myself.

One late night (when I should have been studying, whoops) my friends and I decided to hit up DK’s Donuts & Bakery, a 24-hour donut shop located in Santa Monica, CA. I was already astounded by the variety of baked goods they had, but then I got one look at the cronuts (or “DK’s Double-Decker O-Nut,” renamed due to a trademark issue with the original Ansel bakery’s name). 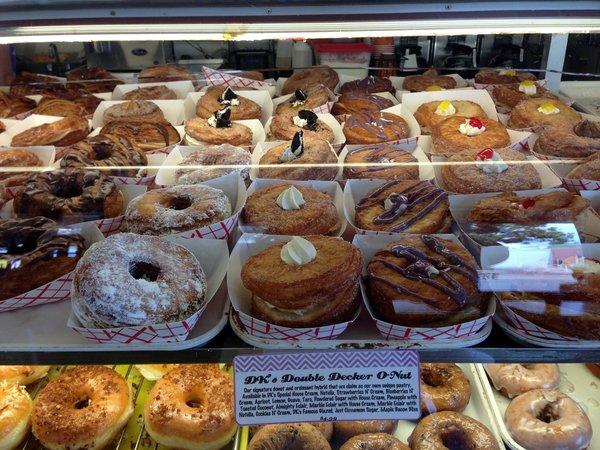 All I can say is: wow. They had cronuts galore; the display had just about every size and flavor. Some unique fillings included coconut, guava, Oreo, DK’s special house cream, maple bacon, even a sausage-and-egg . The flavor I decided to try was taro (another weird fruity combination to have with your pastry, but hey, I was feeling adventurous). 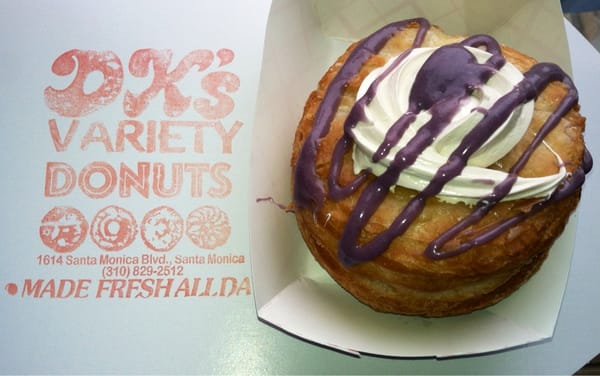 Honestly, it was…. just okay. The taro drizzled on top tasted sweet, just like a purple yam mixture should taste. The actual cronut itself, plus the filling, was pretty interesting. It was a sweet, pasty white cream that instantly filled your taste buds with sugary sweetness. But, I don’t know… to me, it tasted more like a regular donut that I could have saved $4 atRandy’s for, where donuts are a mere 99 cents. I saw the layers of the croissant hybrid, but the actual taste didn’t seem very croissant-ish to me. It just tasted like a normal Krispy Kreme donut, perhaps extra-sweetened and rolled around in additional glaze and sugar. But it wasn’t anything special. I didn’t have a “foodgasm” or whatever they call it; my mind wasn’t blown. Maybe it was just the donut shop, which claims to have its own spin on Chef Ansel’s original baked masterpiece.

The cronut is a tasty fad that, like many other “in” foods of today (see:ramen burger), will cool down just as fast as they’re heated up.  Hey, that’s just my opinion though.

Give it a taste yourself! Let me know what you all think about the cronut, and any other food fads you think I should write about/try on Fadology!